How a Lifetime of Playing Sports Helped Me Survive Cancer 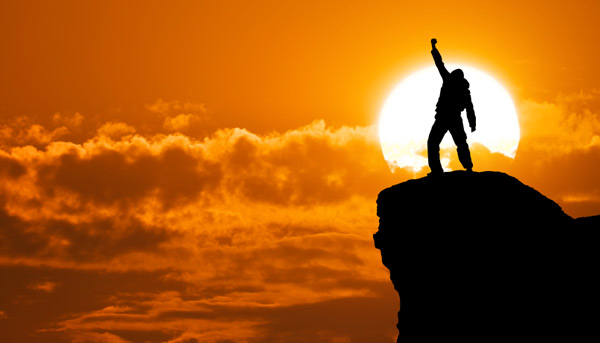 I can clearly remember my wife's voice when she called me with the bad news.

"Hi honey..." she said quietly as her voice trailed-off into silence.

I said hello back, expecting her to finish her sentence. Instead what followed were the sounds of her heavy sobs. Softly she finally managed to say, "Your doctor just called with the test results. You have cancer."

Stage II, Non-Hodgkins Lymphoma to be exact. My mind reeled as my worst case scenario was now a reality. “I can’t die! I have a young son that relies on me,” I thought. “I have a wife, family, friends, not to mention my employees and my company, Athletic Stuff to think about. I can't let them down. This can’t be happening!”

Up until this point, I had been a healthy as any middle aged man could be. I had played sports at various levels since elementary school and kept myself in pretty good shape for a guy my age (51 at the time). But participating in sports and exercise does not make you immune from this deadly disease.

I tried to calm my wife down the best I could, not exactly sure what to say. But just moments later, and if by instinct, my resolve kicked-in. It was a familiar feeling, one I had experienced many times during a big soccer game. It grew to a strong, defiant voice in my head, and it filled me with strength. “Bring it on,” I said firmly to myself. I wasn’t about to give up and go out with a whimper.

I was athletic, smart and most of all, mentally tough. My grandmother was the foundation of our family and was the toughest woman I have ever known. I imagined that her unyielding strength flowed through my veins and allowed me to persist where others failed. It gave me a quiet confidence that I carried with me whether I was playing Dodgeball, Basketball or Football on the playground, or as the goalkeeper on my Soccer teams through college and beyond. That fateful day, it gave me the strength I knew I would need to get me through this challenge.

They say that life is a game, and I truly believe that. Both have a start, objectives, goals, rules, obstacles and finally, a finish. And much like sports, your best results come from having a good attitude, a strong team and perseverance. And so I started to put together my team. To me this meant contacting the people who I knew I could depend on to fight this disease. This included family, friends, employees, doctors and nurses alike.

Each one brought something important to the table. For some that involved emotional support, a kind word or a kick in the butt. For some it involved helping around the house, preparing meals, driving me to appointments or picking up my medication. For others it meant running my company and covering many of my daily duties.

I also found profound inspiration from memories of my father and grandmother, both of whom lost their fight with cancer years ealier. I remembered my dad and how he handled his illness to the end. He was always positive, loving and present – never slipping into fear or remorse. I would think of my grandmother and how she consistently handled the pain, and always focusing on her family. To the end she would tell me, “Mijo, be tough!” as she balled-up her little fists to get across her point. Both my father and grandmother served as team members for me, bringing me inspiration that survived them both.

And just like with every good team, there were ones that did not make the cut. It was just as important to not include those who would drain my energy, or fill me with fear and concern. This did not minimize them to me, but the reality is that we can’t make every team out there. I can’t hit a baseball to save my life, but I can sure stop a soccer ball rocketed towards my goal!

Knowing that I was not in this alone, that it was a team effort and I had many strong shoulders to lean on made a world of difference for me.

When I was younger, I had a soccer coach that used to preach to the team an old Charles Swindoll quote, “Life is 10% what happens to you and 90% how you react to it.” He would say it over-and-over again to us (usually when we were losing!) To be honest, it meant nothing to me until one day the meaning hit me.

Both perceptions are equally true, but only one creates a positive attitude and provides access to your maximum abilities; the same ones necessary to win at the highest levels. It is what allows you to get into the zone to achieve amazing things. We see top athletes who seem unstoppable. They can’t miss a shot, or be taken down. It’s almost like they are unconscious to what is going on around them.

To stay positive, my wife always kept a mental picture of me totally healed, and remind me to do the same. So I focused on the day my doctor would look me in the eye while shaking my hand and said, “Congratulations Jason. You’re cancer free!” It made a world of difference to me.

I used this same approach during every chemotherapy and radiation session. I would think to myself how fortunate I was to be there. I was so excited to get treatment that my heart would race every evening just thinking about it. To me, it was my chance to say “Look out cancer, now it’s our turn to kick your butt!” I honestly felt my treatment was a gift rather than an inconvenience, and that changed the way I prepared for it. We all have the choice to view situations as we choose to, whether it be in sports or in life. Why not choose the one that makes things better for you?

Perseverance is much like a muscle. It can be practiced and made to be stronger over time. To consistently push yourself past your comfort zone over-and-over creates a powerful habit that carries far beyond the current circumstance.

For years I had spent countless hours training to be the best soccer player I could be. I would run hills and wind sprints until my lungs burned. I would practice stopping the same shot time and again until my hips were covered in large strawberries – the painful grass burns that keeps you up all night. After catching my breath and dusting myself off, I would do it again. The desire to play sports to my physical and mental limits, and then to find something deep down inside to push beyond those limits, is something that I can still find inside of me today.

There were days when treatment got the best of me. I remember the days when I would soak in the bathtub until the water became ice cold, and then pull myself over the edge of the tub. For what seemed an eternity I would lay on the bathroom floor with my towel draped over my head. My energy levels were at an all-time low and I felt horrible inside.

Perhaps my lowest moment came a few days before Christmas, 2016. I had driven to a local office supply store to buy 2017 calendars for the office, and to try and get some food into my stomach. Pulling into a nearby parking space, I sat in silence while looking at myself in my vanity mirror. I was in a bad place that day. Our company sales were down drastically due to my extended absence, I had not done any Christmas shopping for anyone, and I looked and felt horrible. I stared at this strange person in the mirror and wondered who he was. He was completely bald, a shade of pale gray and had dark circles under his tired eyes. I was exhausted and felt like vomiting. “How did I get here?” I wondered to myself.

I felt helpless and depressed. “I give up!” I cried out loud. I honestly felt as if I could not go on any longer. I was in a deep hole and felt I could never crawl out of it. But just a moment later, a familiar voice filled my head and said firmly, “You NEVER gave up on anything! All of those years of pushing yourself and you’re going to give up now?”

I felt a surge of energy flow through me – and the same never-say-die attitude that carried me through so many tough practice sessions, day after day was back. Years of training and practice had created a resolve that simply would not quite. Looking back at myself in the mirror I said out loud, “As long as you’re going through Hell, get all the way through it.” I made a promise to myself that one-day-soon things would get better, and that anything is possible.

A Victory Against Cancer

As fate would have it, that day came on my 52nd birthday; March 8th 2017. At exactly 2:15 PM, the exact date and time I was born, I completed my last radiation therapy session and was pronounced cancer-free. As I lay on the table receiving my treatment, I thought back on everything that I had been through to get here, and allowed me to defeat a disease that had claimed the lives of two of my family members. I then realized that exactly 52 years ago to the minute, that my mom was laying on a similar hospital bed giving birth to me, and the tears began to stream down my face. “I made it!” I thought to myself.

Looking back I appreciate the lessons that I learned from this challenge. I can see how years of playing sports provided me with valuable tools that serve me to this day, and have a new appreciation for every day I have to play in this magnificent game we call life. I hope my story provides inspiration to anyone going through their own challenge. Remember to set your goals high and go for them. It’s amazing what teamwork, a good attitude and perseverance can achieve.